This queer migration/asylum series examines how intersecting forms of systemic violence shape the experiences of forced migration and everyday life for female- and nonbinary-identifying queer migrants who are living in, or seeking admission to, the United States. The series frames systemic violence that these migrants face as being rooted in and reproducing settler colonialism, colonialism, racial capitalism, and heteronormative gender and sexuality. Presenters will identify the challenges and risks that forced migration and/or seeking asylum creates for female- and nonbinary-identifying queer people on the move, and explore making change.

This event was recorded and will be posted to the DHC's vimeo. 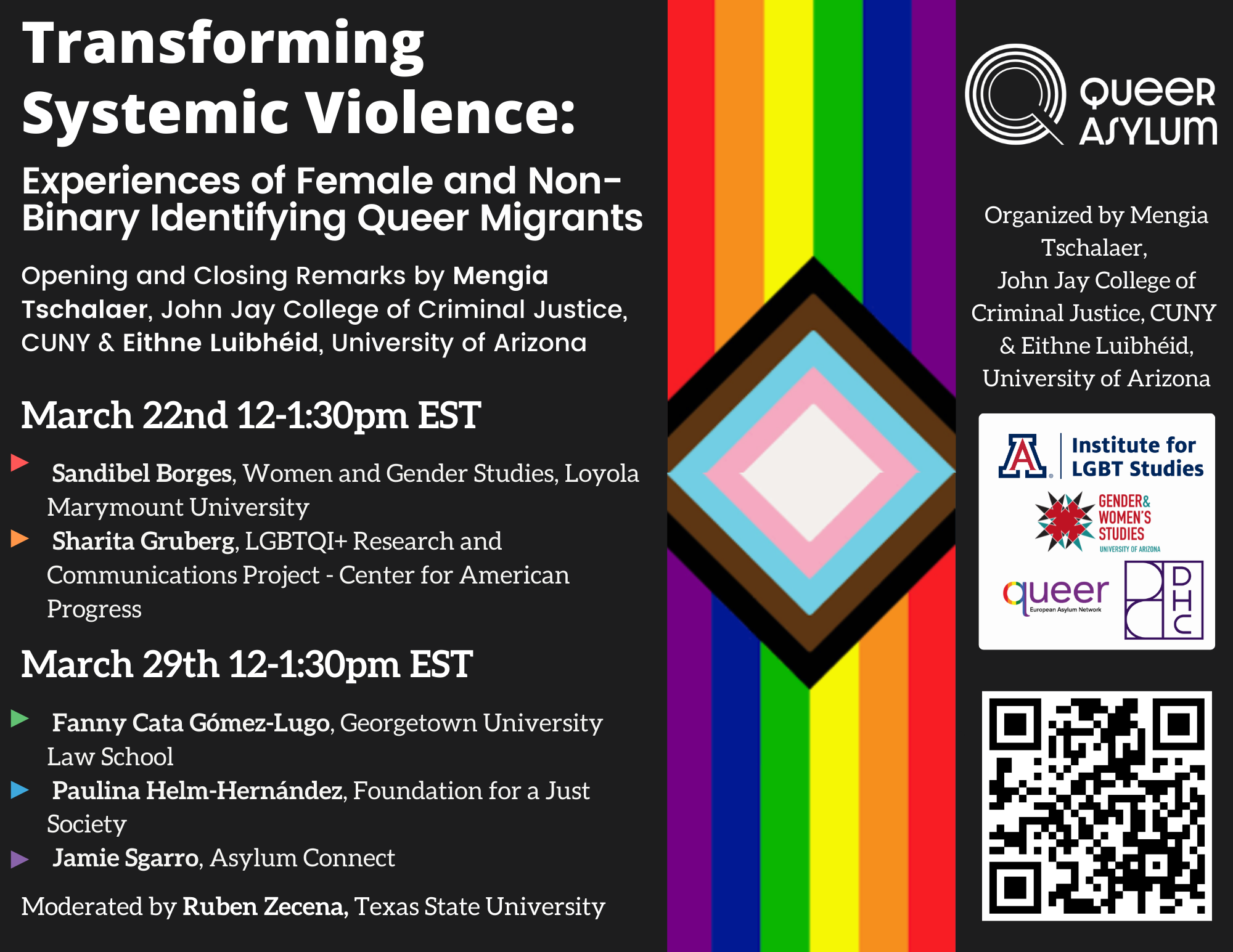 Title of talk: The Criminal Alien Program: A Structure of Heterocolonialism

Title of talk: Broken Promises: The United States’ failure to protect the health and safety of LGBTQI+ asylum seekers

Title of talk: Queer Migration/ Asylum and the struggle for Gender and Sexual Liberation in our Lifetime

Title of talk: Why the Biden Administration Must End the Detention of Trans People

The Digital Humanities Center is committed to hosting and supporting programming that reflects its core values of inclusivity, sustainability, exploration, and collaboration. This event will be live captioned. For questions, accommodation requests, or issues, please email us at digitalhumanities@barnard.edu.

Sandibel Borges is an Assistant Professor of Women’s and Gender Studies at Loyola Marymount University. Her work is situated within the fields of Women of Color and transnational feminisms, feminist and queer migrations, queer of color critique, disability justice, and critical ethnic studies. Her current book project uses ethnography, oral histories, and archival research to examine the colonial and genocidal logics of the U.S. immigration system. It further studies the ways in which queer, trans, and gender nonconforming migrants, looking at the Latinx migrant population specifically, resist and refuse such logics. Borges’s work has appeared in the journals Diálogo, Women’s Studies Quarterly, the Journal of Lesbian Studies, Chicana/Latina Studies: The Journal of Mujeres Activas en Letras y Cambio Social, and Feminist Formations.

Sharita Gruberg is the vice president for the LGBTQI+ Research and Communications Project at the Center for American Progress. She comes to American Progress with extensive experience working in immigration advocacy, law, and policy, as well as experience providing direct service to immigration detainees, refugees, and asylum seekers. Prior to joining American Progress, Gruberg worked as a program specialist for the Women’s Refugee Commission. In that capacity she lobbied Congress and administrative agencies for increased protections for migrant populations, particularly women, families, and unaccompanied children. She has also worked as a law clerk for the American Bar Association Commission on Immigration, where she provided support to immigration detainees in removal proceedings, including LGBT asylum seekers, and filed complaints on detention conditions with the Department of Homeland Security. Most recently, she completed a fellowship with the U.N. High Commissioner for Refugees, where she wrote and submitted refugee resettlement requests to safe third countries and liaised with congressional offices on refugee resettlement cases. Gruberg earned her J.D. from the Georgetown University Law Center, where she was a public interest law scholar and the writing program director for the Georgetown Journal on Poverty Law and Policy, and she also received the Refugees and Humanitarian Emergencies Certificate from the Institute for the Study of International Migration. She holds a B.A. in political science and women’s studies from the University of North Carolina at Chapel Hill.

Fanny Cata Gómez-Lugo is the Senior Director of Campaigns & Advocacy Programs at Women’s Equality Center (WEC). Prior to this, she was Director of Policy and Advocacy at Synergía – Initiatives for Human Rights and she worked as the human rights specialist coordinating the execution of the legal work, projects, and activities of the Rapporteurship on the Rights of Lesbian, Gay, Bisexual, Transgender and Intersex Persons (LGBTI) at the Inter-American Commission on Human Rights (IACHR), between 2012 and 2016. She worked at the IACHR since July 2007, where she started as a fellow, for the Rapporteurship on the Rights of Women. Professor Gómez-Lugo is a graduate from Andrés Bello Catholic University (Venezuela), (Juris Doctorequivalent). She earned a LL.M. with a concentration in international law from McGill University, Canada. On a scholarship from the University of Chile, she pursued graduate studies in “Human Rights and Women: Theory and Practice”. She completed the Women’s Law and Public Policy Fellowship Program (WLPPFP) at GLUC. She has collaborated with Human Rights Watch and the Canadian HIV/AIDS Legal Network. She is currently an Adjunct Professor at the Law Faculty, Georgetown University, where she teaches courses on human rights, sexual orientation and gender identity, and sexual and reproductive rights. For 2016-2018, she was the Adjunct Professor for the Fact-Finding Practicum of the Human Rights Institute at Georgetown Law, which focused on the rights of LGBTQ people in El Salvador and Guyana. She is a member of the Network of LGBTQ Litigants of Latin America and the Caribbean, and a consultant with the United Nations.

Paulina Helm-Hernández is a queer artist, trainer, political organizer, and strategist from Veracrúz, Mexico, who has made the US South her home for more than two decades. For eleven years, she was the co-director of Southerners on New Ground, a social justice advocacy organization supporting LGBTQ people in the US South. Prior to that she coordinated the Southern regional youth activism program at the Highlander Research and Education Center. Paulina has a background in farmworker and immigrant/refugee rights organizing, anti-violence work, and gender and sexual liberation work that centers people most affected by poverty, war, and racism. Helm-Hernández is always exploring ways to deepen political unity with people and institutions willing to demand and organize for collective liberation.

Jamie Sgarro (he/they) is Co-Founder & Executive Director at AsylumConnect, a 501(c)(3) nonprofit organization providing the world’s first tech resource platform designed for LGBTQ+ people fleeing persecution. As a trans man who grew up in a conservative environment, Sgarro remains personally motivated to ensure every persecuted trans and queer person has access to AsylumConnect’s free technology. For his work, Sgarroo was selected as a 2019 Roddenberry Fellow and 2020 Forbes 30 under 30 honoree in Law & Policy. He has been a featured speaker on LGBTQ+ rights and technology for social good, and his work has appeared in national outlets including The HuffPost, Teen Vogue, The Advocate, The Hill, NowThis, and NBC OUT. He received a B.A. cum laude with distinction in Health & Societies from the University of Pennsylvania and a M.S. in Management from Northwestern University’s Kellogg School of Management.

Ruben Zecena is an assistant professor of English at Texas State University. He holds a PhD in Gender & Women's Studies from the University of Arizona, with a minor in Social, Cultural, and Critical Theory. He is an interdisciplinary scholar whose teaching and research focus on Latinx literature and culture, queer migration studies, border studies, film studies, affect theory, women of color feminism, and queer of color critique. His work, scholarship, and teaching are animated by his experiences as a formerly undocumented queer migrant from El Salvador. Zecena is working on his first monograph, tentatively titled Impossible Possibilities: The Unruly Imaginaries of Queer and Trans Migrants, which explores the cultural productions of queer and trans migrants as important avenues for imagining the world differently. His articles have appeared or are forthcoming in WSQ: Women's Studies Quarterly; Diálogo, an Interdisciplinary Studies Journal; Constellations: A Cultural Rhetorics Publishing Space; Studies in Spanish and Latin American Cinemas; among other journals.

Mengia Tschalaer is an Assistant Professor of Anthropology at City University of New York and an Honorary Research Fellow at the School of Sociology, Politics and International Studies at the University of Bristol, UK. She is further a Board Member of the Gender Committee to the ITFLOWS project at Brunel Law School in London. Between 2018 and 2020 she led an EU funded project which examined the experiences of LGBTQI+ asylum seekers with Muslim background within Germany’s asylum system. She is the author of "Muslim Women's Quest for Justice: Gender, Law, and Activism in India" (Cambridge University Press, 2017) and of various articles and chapters on socio-legal resistance, gender, sexuality, migration/asylum, and Islam. She is the co-founder and coordinator of the Queer European Asylum Network.

Eithne Luibhéid is Professor of Gender and Women’s Studies at the University of Arizona (UA) and the former Director of UA’s Institute for LGBT Studies. Her research focuses on the connections among queer lives, racialization processes, state immigration controls, and justice struggles. She is the author of Pregnant on Arrival: Making the ‘Illegal’ Immigrant (University of Minnesota Press 2013) and Entry Denied: Controlling Sexuality at the Border (University of Minnesota Press 2002); the editor of Lives that Resist Telling: Migrant and Refugee Lesbians (Routledge 2021); and the co-editor, with Karma Chávez, of Queer and Trans Migrations: Dynamics of Illegalization, Detention and Deportation (University of Illinois Press 2020), and, with Lionel Cantú Jr., of Queer Migrations (University of Minnesota Press 2005), among other works. She serves on the board of BorderLinks, which, through education, connects divided communities, raises awareness about the impact of border and immigration policies, and inspires action for social transformation.