Social movement researchers and social historians have come to realize that to tell the story of recent histories previously left out of the historical record, we need but ask the people who were there. We ask them the basic who, what, when, where and how of what they did to create social change. But we’re also taught to inquire after their archive: “Do you have any photos, flyers, documents?” We’re encouraged to add to the historical record through interpreting their words, but also to seek material objects that can be added to an archive for future versions of our inquiring selves.

Participating in the Barnard Digital Humanities Fellowship this summer was the final nudge in my return to documentation about black feminist organizations that I collected from 1993-1998. The organizational meeting minutes, retreat notes, small publications, mission statements, COINTELPRO papers, and a host of other records helped me to write about the pioneering place of black feminist activists and the organizations they founded nationally. In Living for the Revolution: Black Feminist Orgnaizations, 1968-1980 (Duke University Press), I used the archive and interviews with black feminists to document the historical, social and political forces that spurred black women to form five organizations: Black Women Organized for Action, the Third World Women’s Alliance, the National Alliance of Black Feminists, the National Black Feminist Organizations and the Combahee River Collective. 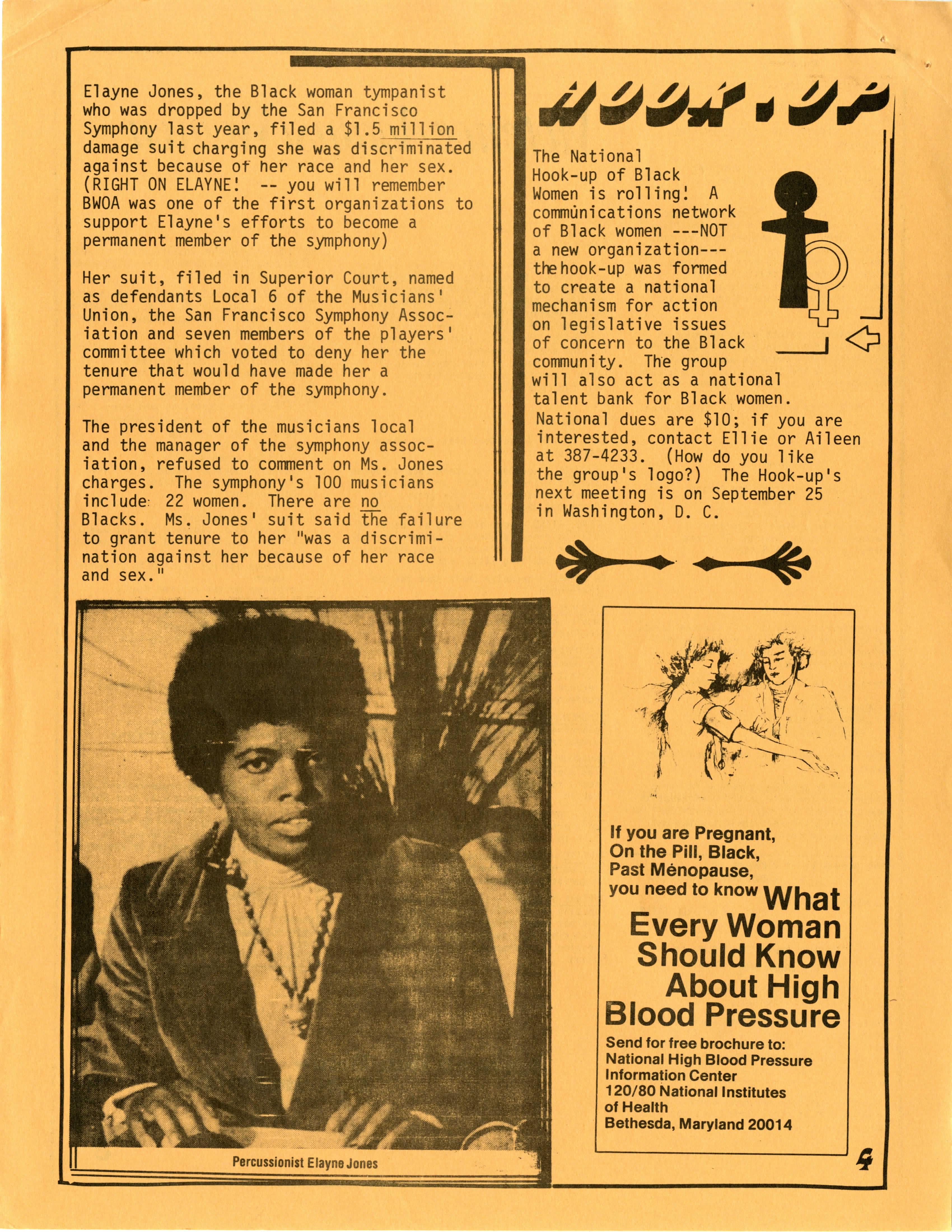 A page from BWOA’s regular newsletter detailing the group’s activities, which included connecting black women across the country engaged in political activism and defending black women in workplace disputes (BWOA, What It Is, vol. IV, no. 8, August 1976).

While I had, indeed, asked after the archives of black feminist narrators, I didn’t think about what would happen to those archives once I wrote a book that would place black feminist activism into narrative of African-American history, women’s studies and social movement history. Where should the papers of these organizations, some found unprocessed in historical societies, others culled from papers in the attics or under the beds of my interview narrators, find a home for other researchers?

It was my personal career shift from faculty to archives staff that was the major impetus for me to consider, somewhat shamefaced, where should these black feminist organizational documents continue to live so that others can make sense of the past and present and envisioning a transformative future? What I learned from moving from one side of the reference desk to the other, was about the long, problematic history of archives, but also about the practicalities of archival work. Archives are problematic in their origin and functions, but they also have the potential for repair and restoration.

A major goal of this project is to bring to the fore all of the black feminist organizations that were active in the late 1960s through 1980s. As pivotal as the Combahee River Collective was, and remains, to the formation and theorizing of black feminist theory and action, they were not the only group enacting intersectional politics before Kimberle Crenshaw and other critical race theorists developed intersectional theory and that theory made its way into the popular discourse. 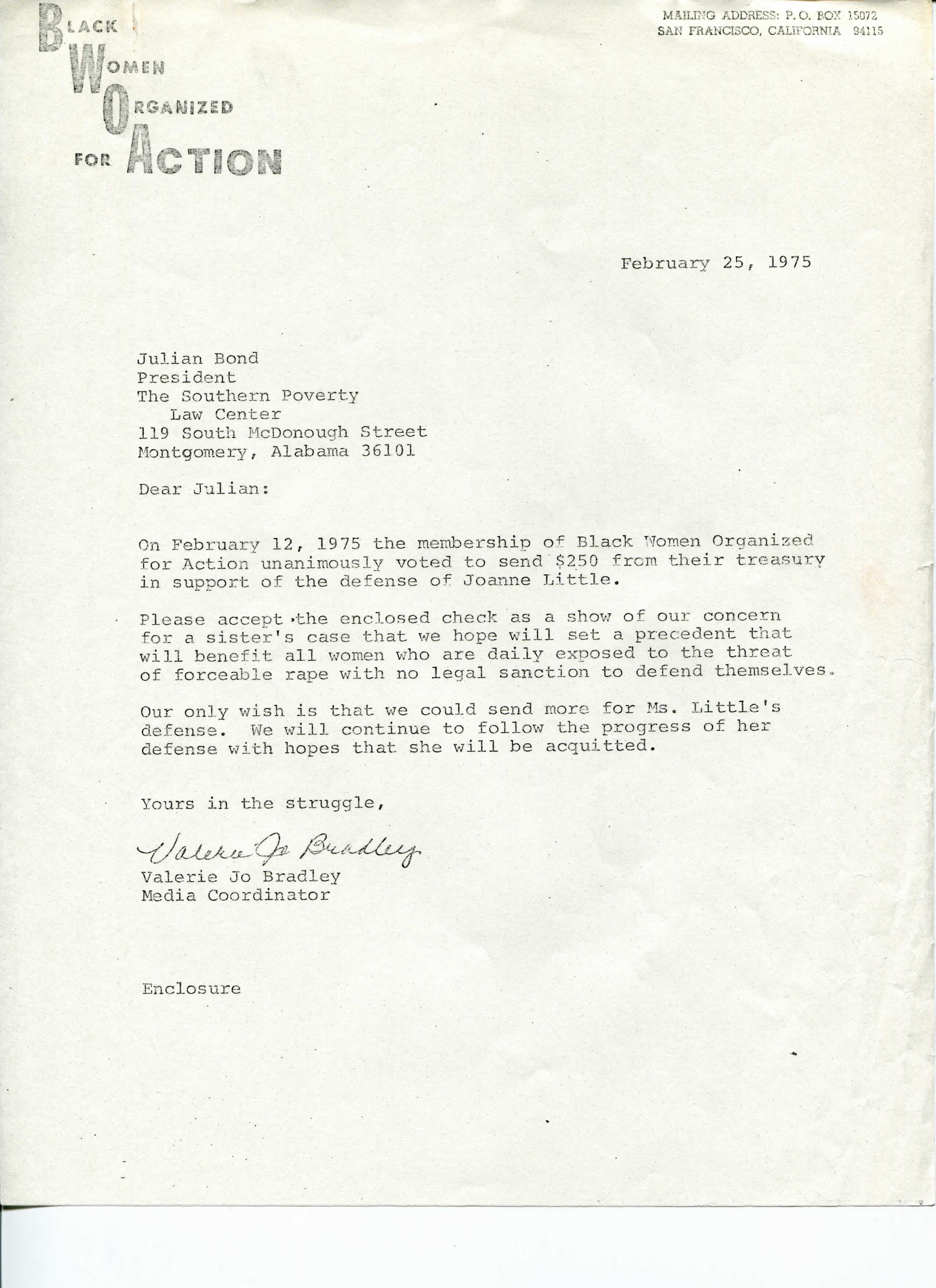 BWOA members donated money to the defense campaign of Joanne Little, a black woman who stood trial and was acquitted for defending herself against sexual assault in 1979. Julian Bond was head of the Southern Poverty Law Center, which organized a major letter writing and fundraising campaign in defense of Little (Letter from BWOA to Julian Bond, 25 February 1975.)

This summer I’m focused on creating the foundations of a black feminist organizational archive online. I’ll be using Black Women Organized for Action’s records as the basis for the archive because, to my knowledge, these papers exist nowhere else. BWOA’s founder, Aileen Hernandez, deposited her personal papers with the Sophia Smith Collection at Smith College, but these documents aren’t widely accessible nor online.

A central idea under consideration as I develop this archive and consider the ethics of doing so is Lae’l Hughes-Watkins’ thinking on the reparative archive. What are my responsibilities as an archivist to these materials? To the historical record? How do ethics around preservation play a role in presenting this material digitally?

I have always maintained that a broader view of black feminism and black feminist activism isn’t dependent on one person and shouldn’t focus on one group, organization or collective. Crafting a responsible black feminst organizational presence online is, but a small contribution to sharing with activists and researchers ways of thinking about a black feminist future in all of its myriad political formations and configurations.