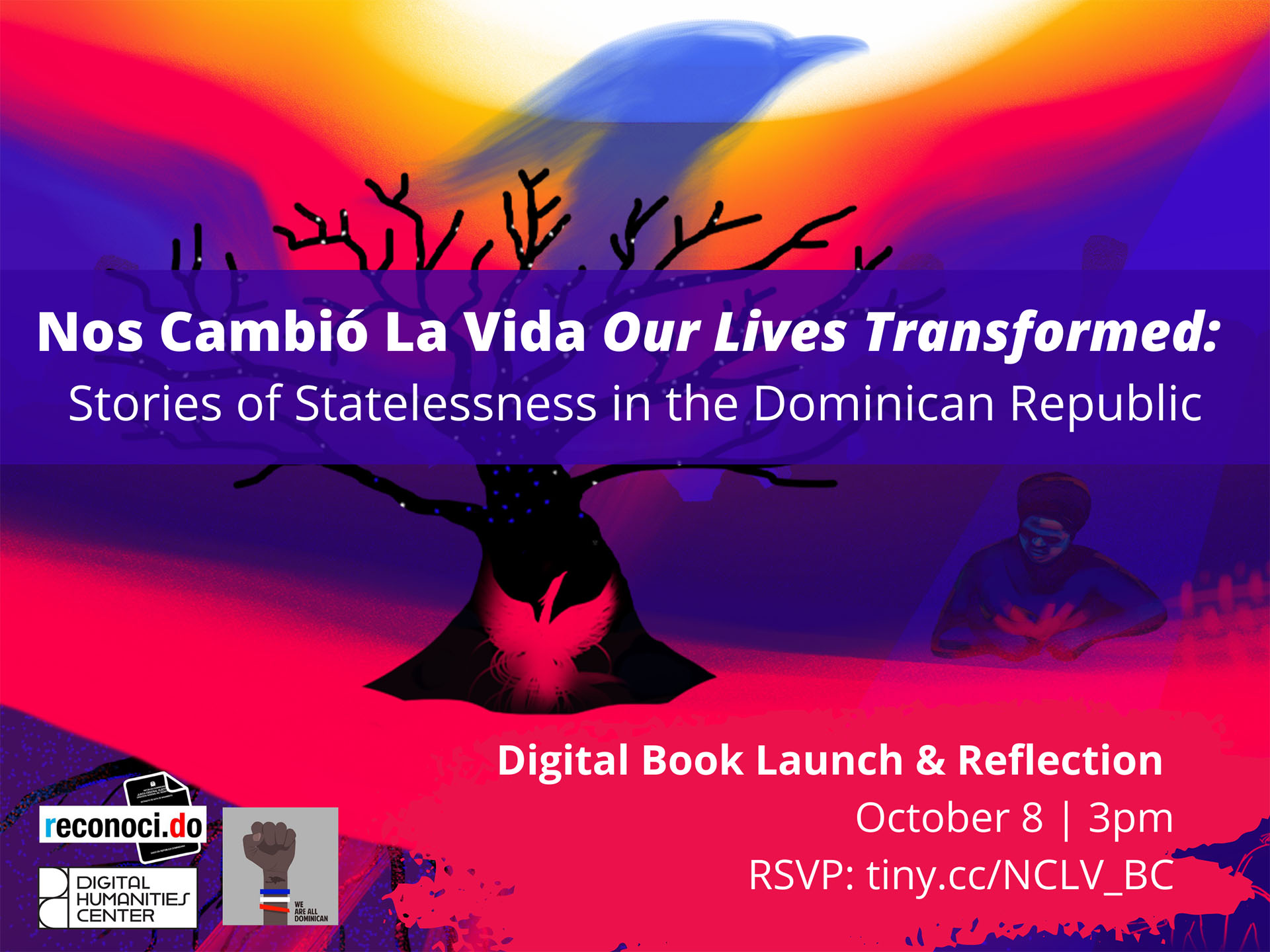 An event to launch the English digital translation of Nos Cambió La Vida, an anthology of memoirs written by Dominicans of Haitian Descent.

Barnard College Library and the Barnard Digital Humanities Center are pleased to host Nos Cambió la Vida / Our Lives Transformed: Stories of Statelessness in Dominican Republic (Digital Book Launch and Reflection), on Friday, October 8, 2021, at 3:00pm. Join us via live-stream on YouTube.

WAAD and Reconoci.do have been in collaboration since 2013, but the seeds of this Digital Book Launch and Reflection were planted in 2017 when one of WAAD’s core members, Amarilys, participated in a writing workshop held in Santo Domingo over several weekends, facilitated for members of Reconoci.do and the communities they serve to have the space to tell their stories out loud. Those facilitated workshops would ultimately lead to the publication of their stories in book form as Nos Cambió La Vida. The workshops were intended to offer community building and affirmation through storytelling as a means to make connections between their experiences and the broader societal forces impacting them. They also served to establish an archive of these important lived experiences and a record of the impact of rulings like TC 168/13 has had on everyday life in a historically marginalized segment of Dominican society.

In 2018, at the request of Ana Maria Belique - a core member of Reconoci.do, WAAD agreed to translate Nos Cambió into English as a means to extend the reach of these important stories in order to build more solidarity with the movement and make connections to other related struggles in the larger African Diaspora. What was initially believed to be a quick task, developed into an almost two year process with about a dozen volunteers initially meeting at the Barnard Digital Humanities Center (DHC) in person in Fall of 2019. By the Spring of 2020 it shifted to regular virtual meetings with a smaller group of volunteers for nearly a year. These virtual translation sessions as workshops explored the purpose of transnational solidarity in a time when COVID-19 was devastating Black communities throughout the Americas, and having particular impact on our collaborators in DR. In addition to convening volunteers, WAAD worked closely with a professional translator and editor, and artist Yaneris Gonzalez who created the aesthetically powerful cover and graphics. Over several months, the Barnard Digital Humanities Center staff planned, designed, and coded a digital edition of the book which is now available for use as an open access educational resource: noscamb.io.

This event will celebrate the release of noscamb.io with readings by the authors and translators, as well as a conversation with Ana Belique and other panelists about the ongoing struggle against statelessness, 8 years after the infamous 168/13 ruling.

We hope that participants at the event and readers of the stories will be moved past the page and screen to take action in demanding that Dominicans of Haitian descent are given the basic human rights they have been stripped of. Our collective intention is to end anti-Black and anti-Haitian violence in the Dominican Republic and across the Americas. Please join us.